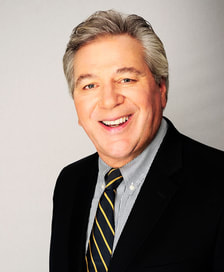 ​Young and his family moved to the Village of Mamaroneck in 2019 after living “next door” in Larchmont for two decades. In his capacity as a journalist, he has covered floods in Mamaroneck for all three major TV stations in New York City as far back as the 1980s. His concern over the lack of effective flood mitigation in Mamaroneck motivated him to volunteer for public service on the Board of Trustees.

Though currently retired from journalism, Young has performed public relations and consultant tasks for several local political candidates and the City School District of New Rochelle.  He has also volunteered his journalism skills to the hyper-local news website, The Loop, and LMC Media, the public access TV outlet for Larchmont and Mamaroneck.  Earlier this year, Young and Producer Dena Schumacher won a National Hometown Media Award for LMC in the “Community Impact” category for their coverage of the Larchmont-Mamaroneck Hunger Task Force.

Young’s other awards include ten Emmys, and 2013 a duPont-Columbia University Award for coverage of the Newtown School Shooting Tragedy.  He is a graduate of the University of Florida’s College of Journalism and Communications and a member of the school’s Hall of Fame.

During his career, Lou Young met and interviewed four US Presidents and hundreds of newsmakers both domestically and overseas.  He is an experienced conflict correspondent who covered the US Invasion of Panama, The Second Palestinian Intifada,and the US Invasion of Iraq.  He was at Ground Zero on 9/11 as one of WCBS-TV’s primary reporters in the disaster zone, and subsequently reported extensively from various locations in the Middle East during that difficult time.

Young and his wife, Debra Quintana, currently live in the Washingtonville section of Mamaroneck. Their two grown children, who graduated from the Mamaroneck School system, both live in Manhattan.